The National Trust is cutting down all NON native trees.
The woods are of interest and conserved  BECAUSE of their exotic planting by seeds provided by Sir Joseph Banks
How can these now in power do so much damage to the historic record and to the biological diversity. 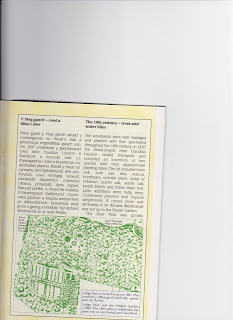 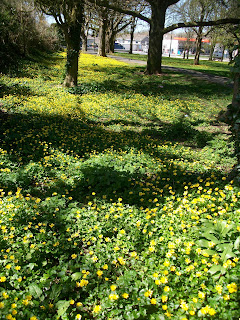 The Green shows what happens after persuading Pembrokeshire County Council not to mow the grass until June to allow the flowers to self seed, from green concrete to colourful display in three years.
Next come daisies then bluebells interspersed with Cuckospit various flowering plants grass seed heads THEN mown.
Posted by Ian campbell No comments:

The scheme now operating in the Main Street is destroying the long term value of historic buildings by not following conservation guidelines (PCC) and using incompatible renders and finishes.

The paving proposals for the East End are innappropriate very vulnerable to damage by traffic or vehicle access to the adjacent properties, will require regular maintenance and is just a passing 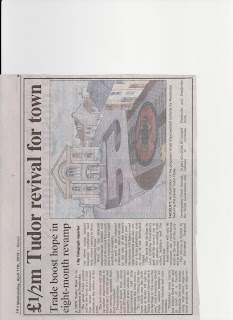 fashion.
Pembroke was chosen as one of the two original Conservation Areas because it was a relatively   complete walled town to prepare for this the then Council demolished  and degraded one quarter of the existing walls to allow commercial development in advance of the Conservation Area .
The remaining walls were damaged by the Conservation Officer and are degrading daily.
The money for the paving would be better spent conserving the remaining walls before they fall down.
Posted by Ian campbell No comments:

Now the barrage is being fitted with a fish pass to comply withe the Habitats Directive, Eels Directive and Waters Directive, the remaining barrier to the passage of migratory fish to their spawning ground is the temporary impounding of the Mill Pond.

What provision is being made for the free flow of tidal waters into the Mill Pond, and when will a fish pass be installed to complete the access to the spawning grounds at Lamphey.
Posted by Ian campbell No comments:

Since the outfall was destroyed by the National Trust there has been a gradual but fundamental change in the form and function of this storm beach
A beach dangerous to bathers is now infinitely more dangerous, a major incident waiting to happen.
Freshwater was concentrated over yards giving a limited but fierce undertow.
Now freshwater enters the beach over more than one hundred meters in  some circumstances,increasing the rate and volume of water creating the undertow,by lowering the sand level between high tides,at the southern end of the beach.
Some years ago I was on the beach trying to to warn twenty adults and children they took no notice and were predictably  washed out to sea, I left to raise the alarm. I was not there to help luckily there were a group of experienced canoists who rescued them all from certain drowning.
Two lifeguards would be overcome.
The form altering function is complicated, the beach changes daily, unpredictably, but the dangers are increasing.
The outfall which managed the form of the beach must be replaced by the National Trust. 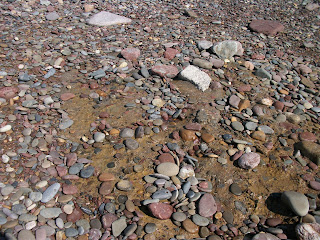 The sandy lumps are clay seal around the chamber washed out by high fresh water level behind the blocked culvert.
Posted by Ian campbell No comments:

The structure consists of three items,the bridge PCC the Chamber NT and the culvert on the beach below HW is excluded form that leased to the PCNPA.
This structure has drained maintained and stabilised the valley for more than two hundred years with little change and intermittent maintenance.
It it is a very important monument to Agriculture in Wales
PCNPA and NT have demolished the culvert without listed building consent.
The six farmers upstream are now in dispute with NT.
The SSI has been degraded since demolition and is no longer as it was a calcareous water meadow, denying its use to the seven farms.
The water level rise since demolition has killed off the invertebrates in the soil so it no longer feeds migratory and resident birds.
The EA intends to clear the waterways inland but this totally negated by the actions of PCNPA and NT
Despite the chamber being cleared in the last few days the water has to seep through up to seventy meters of stones,flooding the watermeadows.
See photograph 08121995 for structure before demolition it is exactly as in 1903
In breech of the
Waters Directive
The Eels Directive
The Habitats Directive
PCNPA consider themselves through Rob Scourfield to be acting for CADW
We consider that the structure should be rebuilt to function as designed in 1790.

ADDITIONAL TO MY SUBMISSION OF 049413 To Rhodri Kelly
I have read the letter from you to John Jukes 01apr2013
Your letter appears to be grounded in opinions not facts.
I cannot understand the reasons for demolition, it is now being justified on the grounds of “Health and Safety”, Not present when listed.
All culverts in the UK are being modified with the addition of grills to fit modern requirements, not being removed completely
The person who agreed the demolition was not told that it was part of a listed structure by the NT
I cannot comprehend the superficial knowledge expressed of the structure the function and historic importance of the complete structure
Structure cannot be detached from function.
Part of the written listing the culvert is essential to the functioning of the listed structure
Stones were kept out sand which entered at high water is easily washed out on a falling tide by the water flow
The design of the chamber as an ogive follows traditional self flushing design for culverts and sewers.
WJ Jukes and myself are in our late seventies I accompanied my uncle in the early war years in his capacity of War Ag for Pembrokeshire,and walked the entire system in the early 1940s
We went to Freshwater West during the war (Which I remind you finished in 1945) most Sundays after lunch and the family (8)walked on the beach accessed by a path through the minefield alongside the chamber you have my drawings of the structure as it was then, a map of 1903, I can supply family photographs.
Section 1(5)also photographs from the thirties and seventies showing that the structure as listed was then complete as originally built,and on 291105..
None of the people whose facts you take were present at these times we have many witnesses who will testify that the structure was complete but had not been maintained for only years before demolition the NT did not carry out their duty of maintaining a listed structure in their care until demolition in 2008
CADW has no record of alterations to a listed structure after 1970, updated 08121995.
The plan does not relate to the written listing which includes the culvert on the map.
The lbc the “authority” are completely ignoring the 1903 map which is the same as the structure before demolition as on the listing plan,which completely contradicts their statement that “being mostly replaced after 1948” (photographs on loveitorloseit.info)
lbc “unmortared” limestone blocks (up to 4/3ft/18”) see photographs and drawings which show the the blocks were fixed with lime mortar
that the blocks holding the hoops were granite.
That these and limestone blocks were laid on lime mortar aggregate and fastened together by iron clamps set in lead giving .a fixed bed to the culvert
The iron hoops were of wrought iron not cast iron or postwar steel and set in lead..
The structure as built carried out its function of drainage through a storm beach for over two hundred years until demolished.
060413 the water level on the grazing land and the SSSI is raised and has changed it from “ a calcareous water meadow” “with rare plants”the reason for designation into an anoxic poached unusable morass of no benefit to migratory water birds and of nesting sites for rare species of birds.
The historic value to Wales
Built in 1790 a pioneering structure to allow unobstructed water flow through a pebble bank, for the purpose of improving the land for agricultural purposes.
The demolition is raising water levels and the increased high level flow is undermining the the foundations at the NE corner of the listed bridge.
PCC are carrying out repairs to the listed bridge as soon as the frost has gone with lime mortar and coarse aggregate.
There appears to be no date on the plan sent by Cadw, it appears to be drawn by a technique and technology not present in 1970,refer to Detail Report dated 310113 last date amended 08121995.
Replacing the culvert will enable NT to conform to their legal duties under.
Habitats Directive
Eels Directive
Waters Directive

Dear Mr Jukes,
Thank you for your recent emails seeking clarification as to the extent of the grade II listed 'Corse Bridge and attached Walled Channel'.
I can confirm that the listing relates to the bridge, the 25 metre long open drainage channel with a path on each side and the retaining walls and the high retaining cross wall.  I have attached a map which identifies these structures.  The extent of any listed building is defined within the Planning (Listed Buildings and Conservation Areas) Act 1990.  Section 1(5) states that a listed building includes any object or structure within the curtilage of the building which, although not fixed to the building, forms part of the land and has done so since before 1 July 1948, and as such shall be treated as part of the building.
<

It is Pembrokeshire Coast National Park Authority, rather than Cadw, that has responsibility for determining the requirement for listed building consent (lbc) and the extent of curtilage for the purpose of listed building control.  Lbc is only required for works which affect the character of a listed building as one of special architectural or historic interest.  In this instance, I understand that the Authority concluded that the outfall was a relatively modern structure, being mostly replaced after 1948, and that its removal did not affect the character of the listed building as one of special architectural or historic interest.  I also understand that the Authority does not consider that lbc is require for the un-mortared limestone blocks at the outfall for the same reason.  On this basis the Authority does not consider these works to be unauthorised and so the issue of listed building enforcement does not arise.
If there is any uncertainty about how the Authority has arrived at its conclusions you should seek further clarification from the Director of Planning.  Cadw has no remit but if you remain dissatisfied with the Authority's response it is open to you to ask its Monitoring Officer to investigate your concerns.
Yours sincerely,
Rhodri Kelly 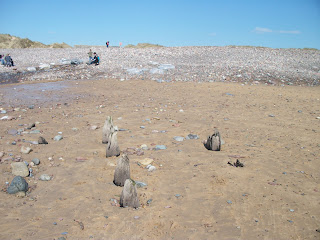 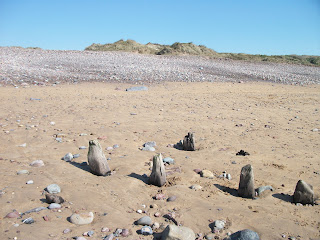 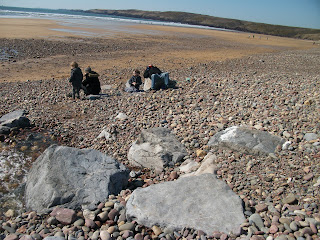 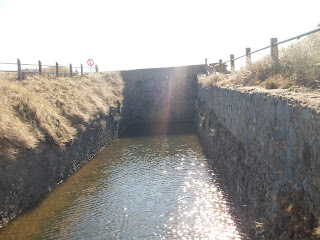 The water level in the chamber despite removal of the stones from the chamber is at the top of the outfall arch to the sea raising the water levels in the water meadows destroying their conservation value
Posted by Ian campbell No comments:

Stackpole soon to be Birmingham 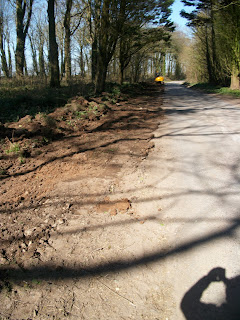 A motor way inside the grounds what is going on?
Posted by Ian campbell No comments: 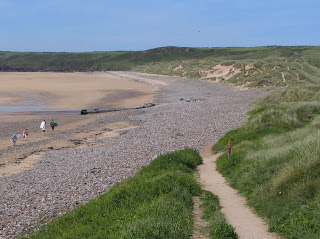