These stones dumped dowstream in the navigable channel must be removed 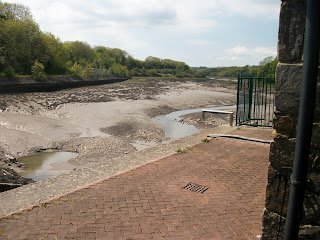 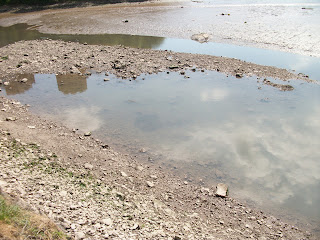 Spoil from the works blocking the navigable channel in Castle Pond 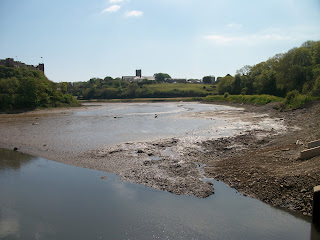 More dumped rocks ,when what should happen is dredging to reopen and  keep channels open 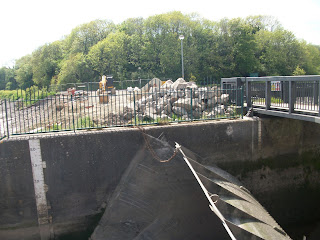 The gate is now well and truly jammed and distorted by someone trying to lift one side by JCB. 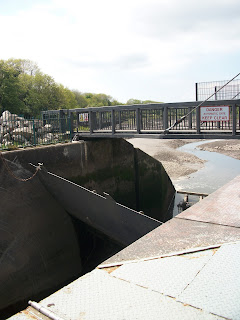 Further obstructions down stream
When the barrage was designed it was to accommodate the mains sewer from the works you can see in the background.
The sill was then too high and obstructed navigation by limiting the times for navigation.
Best demolish the whole thing now,
We can now see what Castle Pond was like before the barrage was no longer operated as designed and as planned..
The purpose of the barrage is to protect Pembroke from storm surges, but has been used and kept closed to satisfy local businesses who are offended by mud and are concerned that a tidal estuary offends the tourists.
Soon the river system to Lamphey will be by law have to be opened to allow the passsage of migratory fish to their spawning grounds.
The fish pass was the first stage . The free flow of sea water allowed by the failed gate has allowed bass and mullet and other species to enter Castle Pond, go and see for yourselves the shoals of fish on a rising tide
The stench has gone the swan overcrowding no longer happens. This improvement must never be reversed by Pembrokeshire County Council keeping the gate closed and allowing Castle Pond to return to the stinking mess it was.
The work at the barrage has resulted in a bank of stones being dumped in the navigable channel above and below the gate these must be removed.
The right of navigation has been ignored . The pontoon landing stage has been vandalised and sunk ,the grid which allows vessels to dry out at the quay is full of  ditched washing machines bicycles traffic cones anything vandals can throw into the waterway.
Posted by Ian campbell